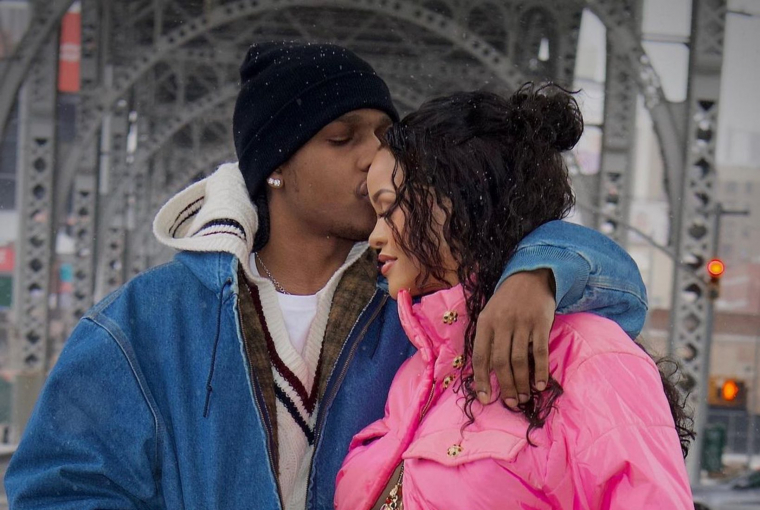 When it comes to maternity style, Rihanna isn’t going to play by the established rules. The viral photos of Rihanna and her partner A$AP Rocky were a harbinger of awesome pregnancy style to come.

And it showed up! All of RiRi’s looks highlighted her baby belly as an accessory to complement her self-expression.

If Rihanna is to be believed, we’ve officially entered a new era where clothes for pregnancy don’t mean you can’t dress for yourself.

The singer was spotted on Feb. 6 in Los Angeles wearing an all-black hooded outfit. With sunglasses, a Carhartt x Wardrobe.NYC zip-up jacket and ribbed leggings from The Attico, the look was not seen, but was a striking statement nonetheless. The centerpiece, of course, was a Jean Paul Gaultier lace-up cardigan, exposing her tummy.

On February 9, the beauty magnate stepped out in a fabulous vintage Roberto Cavalli patchwork style coat with denim, leopard print and fur. She paired it with a fur-trimmed top and baggy low-rise jeans. The look, reminiscent of Y2K, was complete with a Dior tie-dye saddle bag, Awake NY camouflage cap and plenty of gold jewelry. Not to mention Tom Ford snakeskin heels shod over jeans. This look will go down in fashion history along with Saint Laurent’s iconic heart-shaped fur coat she wore in 2016.

Businesswoman that she is, Rihanna attended the Fenty Beauty x Fenty Skin event on Feb. 12 wearing a tailored set of top and pants from The Attico. As for accessories, we’re talking about diamonds – including diamond drop earrings from Chopard and a gold diamond chain from Jacquie Aiche. A$AP Rocky was also there, admiring her pregnant glow, as we all do.

Savage X Fenty, Rihanna’s lingerie brand, is opening physical stores across the U.S. On Feb. 12, she appeared at a store opening in Los Angeles in yet another monochromatic outfit. Rihanna wore a long red leather hooded dress by Alaïa, Amina Muaddi heeled shoes and red eyeliner. Honorable mention went to A$AP Rocky, who wore a sparkly suit and red Prada sneakers to match the mom-to-be.

On Sunday at the Super Bowl, Rihanna supported the Los Angeles Rams team in a navy blue bomber jacket with yellow faux fur trim by Balenciaga. She completed the look with a blue headscarf, a Jetpack hom(m)e tulle button-down sweater and baggy straight-cut jeans. Along with the belly chains, she adorned her look with several lockets and rings from Briony Raymond.

The star’s viral tight, skin-baring ensembles look like a fresh take on maternity style, and we expected nothing less from Rihanna.

According to Elle, it wasn’t until the early 14th century that special patterns of clothing were introduced to make it more comfortable for pregnant women. In the following centuries, adjustable elements, such as aprons and lace panels, appeared in women’s clothing to accommodate the baby’s growing bump.

But then the styles became more restrictive. In the 1700s, corsets became fashionable and were commonly worn during pregnancy. In fact, maternity corsets were a staple of clothing until the 1900s.

In the following decades, women’s clothing was lighter and used as maternity wear, covering and hiding the baby bump. It wasn’t until the 1950s that fashion began to lean toward maternity clothes, and in subsequent decades, tented dresses and empire waist dresses became fashionable.

In the 1990s, the appearance of baby bumps began to be treated more normally, thanks in part to the influence of celebrities. When a pregnant Demi Moore appeared on the cover of Vanity Fair in 1991, this controversial issue may have revolutionized attitudes toward pregnant women in North American society.

During the ’90s and early part of the century, designers began to celebrate pregnancy, and more and more celebrities went out in tight maternity clothes, such as Jada Pinkett Smith at the Blockbuster Entertainment Awards in 1998. At that time, pregnant celebrities wore tops, tight silhouettes and babydoll dresses.

Over the past two decades, we’ve seen many striking looks for pregnant women – Kim Kardashian’s floral Givenchy number for the 2013 Met Gala and Emily Ratajkowski’s unbuttoned street style in 2020 come to mind.

Of course, no celebrity fashion look during pregnancy is without intense public scrutiny. But looking back on history, we’ve certainly traveled a long way.

In 2022, it looks like we’re entering the era of personalized pregnancy style thanks to Rihanna.