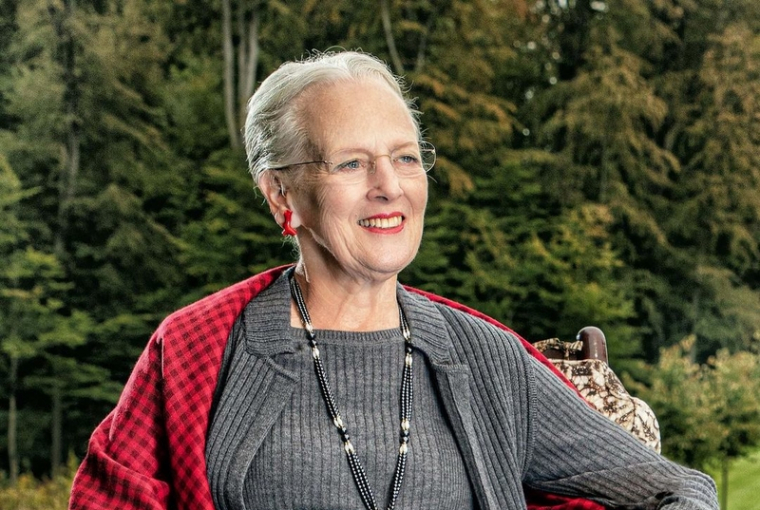 Queen Margrethe II of Denmark celebrated her 82nd birthday last weekend at Marselisborg Castle, her official royal residence. Despite rumours of an imminent abdication in favour of her eldest son Frederik, the queen is very active and does not seem to be planning to retire.

Margrethe II celebrated her birthday, as usual, with family at her Aarhus home. For the first time since the start of pandemic, the traditional parade of the Royal Life Guard was held there. The monarch, Crown Prince Frederik, his wife Mary and their four children greeted the crowds of Danes from the castle balcony. The Queen wore a blue checkered suit and a silk shirt to match. The look was completed by a massive brooch and earrings with blue jewels.

On Saturday, the “Caritas” fountain (translated as “Mercy” in English) built in 1608 on Gammeltorv Square in Copenhagen, was also the scene of “dancing golden apples”. According to a tradition dating back to the 18th century, brass balls covered with 24-carat gold, symbolising golden apples, are lowered into the fountain on the monarch’s birthday and suspended in the water currents. This is considered one of Copenhagen’s mid-April attractions.

Margrethe Alexandrine Thorhildur Ingrid was born on 16 April 1940 in Amalienborg Palace in Copenhagen. Her father was King Frederik IX of the Schleswig-Holstein-Sonderburg-Gluksburg dynasty, and her mother was Princess Ingrid of Sweden. They had no male children, so in 1953 Margrethe, as the eldest of three daughters, was given the status of “presumptive heir to the throne”, in accordance with a new law that granted women the right of succession in exceptional circumstances. Margrethe received a home elementary education, then attended a simple school in Copenhagen and a boarding school in Great Britain from 1955-1956. Already at the age of 18, she became a member of the Council of State and chaired its meetings in the absence of the King. She also volunteered with the Danish Air Corps and, from 1960, studied at universities in Denmark and other European countries, above all in Great Britain.

On 14 January 1972, following the death of her father, she became the Queen. She is the second woman and second Margrethe on the Danish throne. Her predecessor Margrethe I ruled the country in the early Middle Ages.