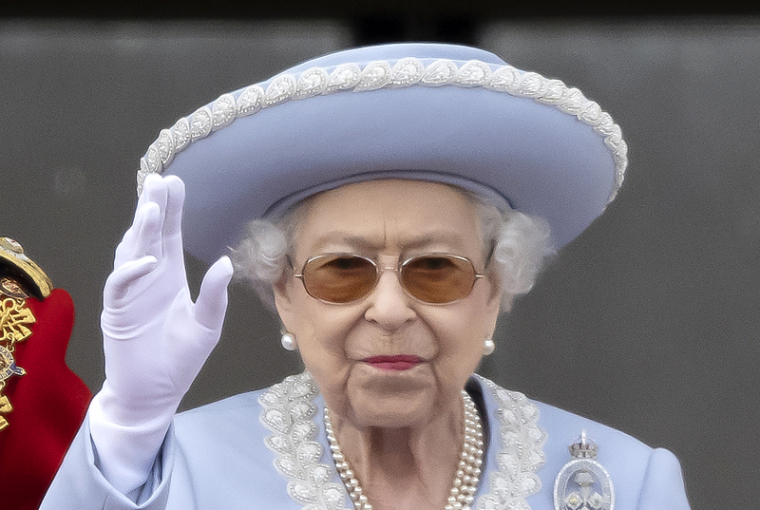 LONDON, ENGLAND - JUNE 02: Queen Elizabeth II, on the balcony of Buckingham Palace, watches the RAF flypast during the Trooping the Colour parade on June 02, 2022 in London, England. The Platinum Jubilee of Elizabeth II is being celebrated from June 2 to June 5, 2022, in the UK and Commonwealth to mark the 70th anniversary of the accession of Queen Elizabeth II on 6 February 1952. (Photo by Paul Grover - WPA Pool/Getty Images)

The UK is hosting a multi-day celebration of the platinum jubilee of the reign of Queen Elizabeth II. The celebrations to mark 70 years on the throne began with a Trooping the Colour parade and the traditional appearance of the royal family on the balcony of Buckingham Palace.

Celebrations of the birthdays, or in this case anniversaries, of monarchs since the 17th century have taken place in June, regardless of when they were actually born. The originator of the innovation was George II, who was born in November, a very unlucky month in terms of weather. He rightly thought that subjects would be reluctant to have parades or celebrations at this time of year and moved the official celebrations to summer. His successors continued the tradition, and in the 19th century King Edward VII made it the official standard. Since then, the Trooping the Colour parade takes place on the first weekend or public holiday in June.

The strange name of the parade can be explained by the fact that in the old days, colours were used to refer to flags. Trooping the Colour involves seven army regiments serving the Queen. Each has its own distinctive banner. Year after year they take turns presenting their ‘colours’ to the soldiers and the head of state, who is the commander-in-chief of the armed forces. This time the honour fell to the 1st Battalion of the Irish Guard. The tradition is ancient, based on the ancient Roman military custom of displaying their banners to the troops before battle, so that the fighters know the ‘colours’ and can navigate them in battle. So this beautiful annual festive ceremony also has a practical meaning.

These days the Trooping the Colour parade starts at 10:00am with about 1,500 troops, 350 horses and about 400 musicians arriving in central London. The procession starts from Buckingham Palace and ends at the Horse Guards’ parade ground. The marching Guards are followed on horseback by members of the royal family who are honorary colonels of these units. Thus the Prince of Wales is Colonel of the Welsh Guards, the Duke of Kent of Scotland, the Duke of Cambridge of Ireland, and Princess Anne is Colonel of the Royal and Blue (one of two regiments of the Palace Cavalry). When she was younger, the Queen also rode with them, hosting this parade. This time it was Prince Charles who led the troop review instead, with Elizabeth II herself proceeding to Buckingham Palace by car. The Queen watched the parade from her balcony, along with the Duke of Kent. The rest of the senior family – the Duchesses of Cornwall and Cambridge, Camilla and Kate, along with children George, Charlotte and Louis, and Prince Edward’s family – travelled to the palace in an open carriage. All the other members of the royal family watched the parade from the windows of the royal garrison commander.

The parade ends with a fireworks display of 41 cannons in Green Park and 62 cannons in the Tower of London. The entire royal family then walks to Buckingham Palace and out onto the balcony, where they watch the country’s Air Force aircraft fly over. But this year it has been announced in advance that only working members of the royal family will be on the balcony.

By the way, the tradition of going to the balcony during ceremonial events is relatively recent. And the balcony itself did not appear until the time of Queen Victoria. In 1845, she and Prince Albert had a family of six (they subsequently had nine children), and the monarchess complained to her Prime Minister Sir Robert Peel of the lack of space for living and entertaining. It was decided to build another wing on the east side of the palace. The balcony was part of the new main façade, and was built at the suggestion of Prince Albert. It is known that the royal family has appeared on it since the Great Exhibition of the Industrial Works of All Nations, held in London’s Hyde Park from 1 May to 15 October 1851. From it, Queen Victoria watched the troops leaving for the Crimean War and greeted them on their return.

In 1934 Prince George, Duke of Kent and his Greek bride Princess Marina were the first members of the royal family to wave from the balcony to those gathered below, and thus made contact with their subjects. This form of communication became popular from the start: at George V’s Silver Jubilee in 1935 and the coronation of George VI in 1937, the little Elisabeth – the future queen – also waved to people at the palace gates.

The members of the royal family on this balcony change: some grow old and die, others grow old, marry and raise children, but it is still the same Windsors who are the centre of British life and a symbol of the great history of the United Kingdom.