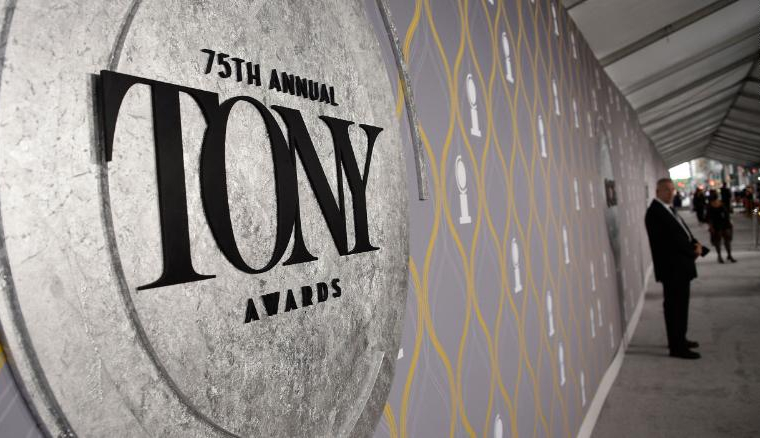 A view of the red carpet appears before the start of the 75th annual Tony Awards on Sunday, June 12, 2022, at Radio City Music Hall in New York. (Photo by Evan Agostini/Invision/AP)

However, photographers’ attention was drawn to Paris and Prince Jackson – Michael Jackson’s children came to support the production about their father “MJ: The Musical”, which premiered in February this year. For the red carpet, Paris wore a flesh-coloured maxi with open shoulders, while Prince opted for a classic black suit. Taking to the stage to introduce the Best Musical nominee, Prince mentioned that their father was a fan of the genre, so he was honoured to represent this particular nomination.

The show was nominated for 10 Tony Awards, but took only one prize. In the end, Strange Loop was voted best musical.

Best Revival of a Play: Take Me Out

Best Revival of a Musical: Company

Best Performance by an Actor in a Featured Role in a Play: Jesse Tyler Ferguson, Take Me Out

Best Performance by an Actor in a Leading Role in a Play: Simon Russell Beale, The Lehman Trilogy

Best Performance by an Actress in a Leading Role in a Play: Deirdre O’Connell, Dana H.

Best Performance by an Actor in a Leading Role in a Musical: Myles Frost, MJ

Best Performance by an Actress in a Leading Role in a Musical: Joaquina Kalukango, Paradise Square

Best Performance by an Actress in a Featured Role in a Play: Phylicia Rashad, Skeleton Crew

Best Performance by an Actor in a Featured Role in a Musical: Matt Doyle, Company

Best Performance by an Actress in a Featured Role in a Musical: Patti LuPone, Company

Best Costume Design of a Play: Montana Levi Blanco, The Skin of Our Teeth

Best Direction of a Play: Sam Mendes, The Lehman Trilogy