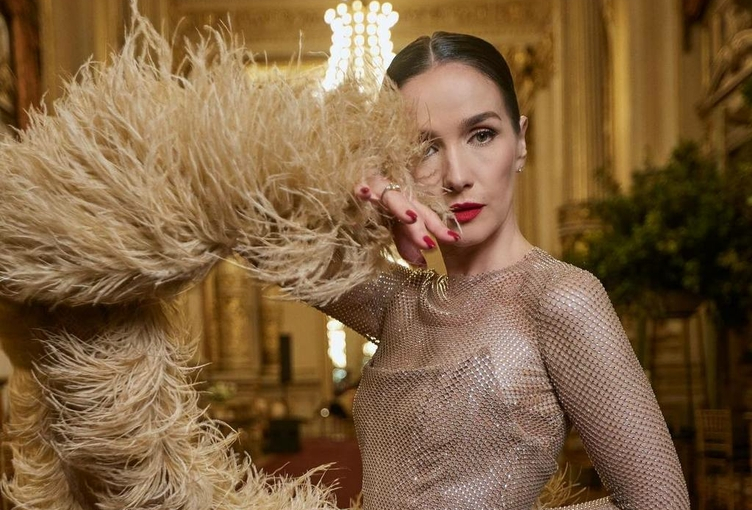 Star of the Argentine film industry Natalia Oreiro presented her new project – the series “Santa Evita”, the trailer of which was published by Hulu streaming service a week ago. The premiere took place at the Teatro Colón, an opera house in Buenos Aires founded in 1908. The day was not chosen by chance – July 26th was the 70th anniversary of the death of Eva Perón, who was played by Oreiro.

The 45-year-old actress came to the opera house in the image of a diva – she wore a gold dress by Argentine brand Maria Gorof embroidered with crystals, with a train and a cape of feathers attached to the dress cuffs. The look was completed by golden pointed toe shoes, Debbie Mac Donald Joyera stud earrings, femme fatale makeup with bright pink lipstick and neatly pulled-back hair. Recall, she had to dye her hair ash blonde for the shoot, but now Natalia is back to her hair colour.

“Santa Evita” is a TV series about the fate of the body of Eva Perón, the wife of Argentine president Juan Perón, who passed away at the age of 33. Born into poverty to become the country’s First Lady, Eva Perón died of cervical cancer in 1952. The body of the woman, considered a saint by the Argentines and affectionately known as “Evita”, was embalmed and her funeral was postponed until a monument could be made. The monument was never erected, however, and three years after her death President Juan Perón was overthrown. The new government wanted to erase the legacy of the former head of state and therefore hid the embalmed body of his wife for 19 years. During this time, Eva’s remains have become surrounded by myths – many believed that Argentina’s troubles would only end when the woman’s body was finally buried. As a result, Eva’s body did not find peace until the 1970s, when the former president returned from exile. Eva was buried in the Recoleta cemetery in Buenos Aires.

The drama series was directed by Colombian cinematographer Rodrigo Garcia, known for Female Secrets, Nine Lives and The Mysterious Albert Nobbs, and produced by actress Salma Hayek. In addition to Oreiro, the cast of the film includes Dario Grandinetti (Juan Perón) as well as Ernesto Alterio, Diego Velasquez and Francesc Orella. The plot is based on the novel of the same name by Argentine writer and journalist Tomás Eloy Martínez.

The series is already available to watch on Hulu.