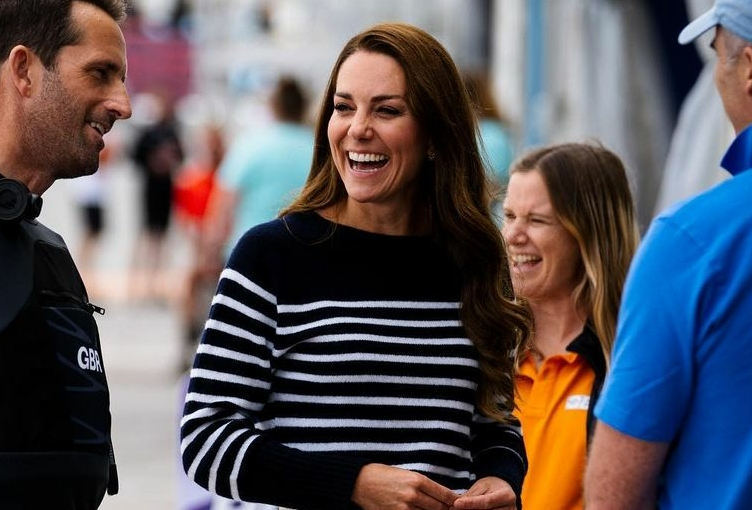 Kate Middleton spent last weekend in Plymouth, UK, where she took part in a friendly regatta against New Zealand. The Duchess competed as part of the team of the famous Ben Ainslie, a four-time Olympic sailing champion.

The race started on the Trinity Pier where Kate showed up in an off-the-wall look – a blue and white striped Erdem Lotus jumper from last year’s collection and white Holland Cooper high-waisted mini shorts, respectively, without the tights that are the mandatory dress code for female monarchs. She completed her casual outfit with white Superga sneakers, gold Orelia earrings and a famous engagement ring, once owned by the late Princess Diana. Photographers on board the catamaran captured the Duchess in a black wetsuit for yachting.

Kate Middleton and Prince William have been sailing enthusiasts for quite some time. This summer they spent a particularly long time on the coast teaching their children how to sail.

Apparently, for the sake of some social and sporting activities, the Cambridges have had to take time away from their family holidays. In mid-July it was revealed that they and their three children had left for an unknown destination, and it is likely that the final destination was their country home Anmer Hall in Norfolk. This is where they go most often, usually on school holidays. Also traditionally in August, William and Kate visit Her Majesty’s Scottish residence in Balmoral with their children, so they are likely to spend a few days there this summer.