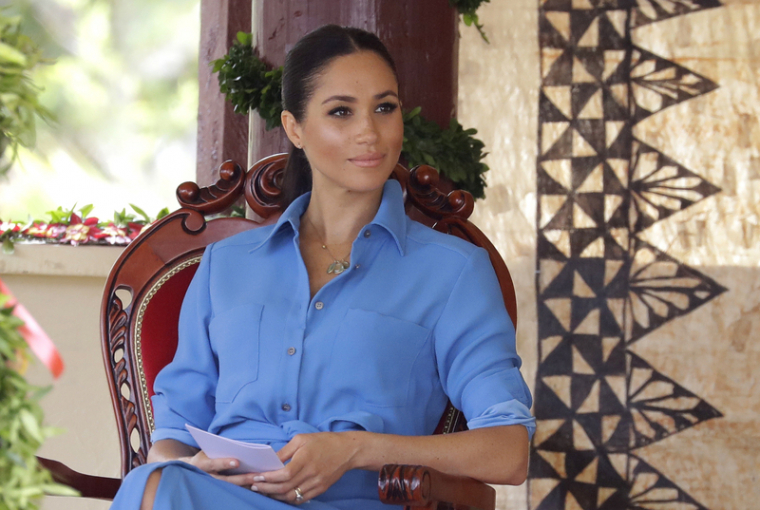 TUPOU COLLEGE TOLOA, TONGA - OCTOBER 26: Meghan, Duchess of Sussex talks with students during a visit to Tupou College in Tonga on October 26, 2018. Prince Harry and his wife Meghan are on day 11 of their 16-day tour of Australia and the South Pacific. (Photo by Kirsty Wigglesworth - Pool/Getty Images)

The Duchess of Sussex, wife of Prince Harry, turns 41 today. On the special occasion, key members of the royal family represented by Prince Charles and his son Prince William, as well as their wives, Camilla of Cornwall and Kate Middleton, congratulated Meghan Markle on social media. Both accompanied the warm wishes by posting portraits taken during the Sussexes’ last visit to London to celebrate the Queen’s Platinum Jubilee. That’s when Charles met his one-year-old granddaughter Lilibeth, daughter of Meghan and Harry, as well as Elizabeth II herself.

Happy birthday Duchess of Sussex! – Charles and Camilla signed the photo, adding a red balloon emoji to the text.

Despite the chilly relationship between Meghan Markle and Kate Middleton, the Cambridges didn’t overlook the milestone date in the Duchess’ life and also published a portrait in the snow-white outfit she wore at their last meeting at a church service celebrating the Queen’s 70th anniversary on the throne.

Happy birthday to the Duchess of Sussex! – They added succinctly.

Meghan is expected to celebrate her birthday  with her husband, Prince Harry, and their two children – 3-year-old Archie and baby Lilibeth.

The couple is currently living in their mansion in Montecito, California. According to press reports, the couple are filming a reality show about their own lives “At Home with the Duke and Duchess” right at home with the support of TV industry professionals, and the series is being directed by the director of the fourth season of “The Handmaid’s Tale”. The project will be launched as part of Sussex’s impressive $100 million deal with streaming giant Netflix. The reality series is expected to be released alongside Prince Harry’s memoirs, which have the potential to become a scandalous new bestseller about intrigue within the royal family and ruin the Duke’s bond with Buckingham Palace forever.