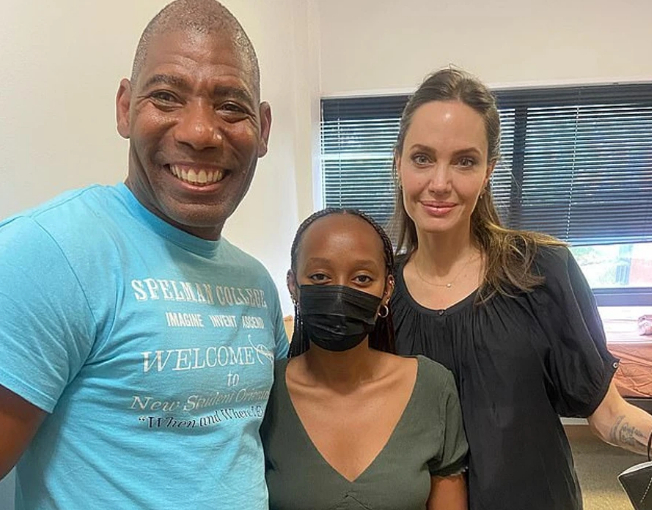 Here comes another nestling of the Jolie-Pitt family leaving the parental nest. Following Angelina Jolie and Brad Pitt’s eldest adopted son Maddox, who left for South Korea in 2019 to study biochemistry, 17-year-old Zahara has also gone to university, as Jolie announced on social media in early August. Starting in September, the girl will be attending a liberal arts college in Atlanta.

It should be noted that Spellman College is not a simple educational institution. It is America’s first college for African-American girls. The day before, Angelina took her daughter to campus, where she also spoke with Vice President of Student Affairs Darryl Holloman and the president of the college itself, Dr. Ellen Gale.

“I’m going to cry! I haven’t started crying yet,” said the actress, trying to describe her feelings after her daughter entered adulthood.

Brad Pitt, who is now actively promoting his new film Faster Than a Bullet, has also not remained away from congratulating his adopted daughter. At one of the American premieres, he commented on the event and admitted that he was incredibly proud and happy for Zahara. Incidentally, the aforementioned elder Maddox is not in contact with her father and has even dropped his last name.

Recall that Angelina Jolie and Brad Pitt have six children in common. They adopted Zahara in 2005 by taking a girl from an orphanage in Ethiopia. Aside from her, the family has two other adopted children – 20-year-old Maddox Shivan and 18-year-old Pax Thien, and three biological ones – 16-year-old Shilo and 14-year-old twins Knox Leon and Vivien Marcheline. For a long time after their divorce, the former spouses fought over custody of the children, and it wasn’t until five years later that Brad Pitt won the case, so they are now raising them together.