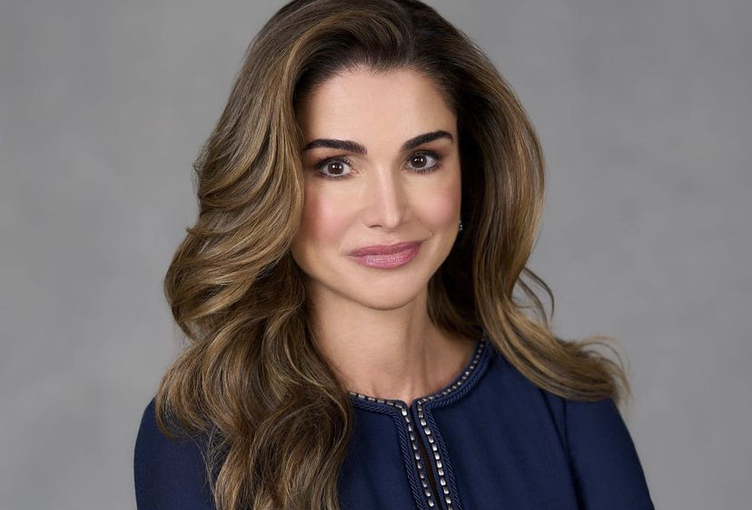 The Queen of Jordan, wife of King Abdullah II, will celebrate her 52nd birthday on August 31st. Unlike last year, for some reason, the royal palace press office unveiled the striking portraits of Her Majesty as early as a week before X Day. Judging by the outfits, it was decided not to hold a separate photo shoot, but to “catch” the queen during official events.

So, in the first photo, Rania is posing in an amber Erdem pantsuit in which she met UNESCO special envoy Sheikha Moza and First Lady of Qatar Sheikha Jawaher in October last year. The second photo shows the Queen in a black dress with red embroidery, which she also posed in for a double portrait with her husband. The third shows Her Majesty in a navy blue set of a cropped jacket with a white trim and matching skirt.

The Queen of Jordan is one of today’s most striking monarchs, a style icon and a shining example of a modern woman who manages everything – actively engaged in public life, fulfilling her royal duties and at the same time being a loving wife and a wise mother.

“As parents, we tend to fixate on the personal needs of our children, but I always remind them to be mindful not only of their own needs but also the needs of others. We teach our children empathy, kindness and compassion – qualities that are usually taught at home and at a very early age. Most importantly, I always reiterate that they should carry their titles, not the other way around. It’s a responsibility, not a privilege,” Rania told Britain’s HELLO! in an interview in 2019.

King Abdullah II and Queen Rania have four children in the family. The eldest son and daughter, Crown Prince Hussein and Princess Iman, are getting ready to get married. A month apart, the two announced their engagement: Iman got engaged in July, and Hussein announced the impending celebration in mid-August. The couple are also raising a daughter, Salma, and a son, Hashem.