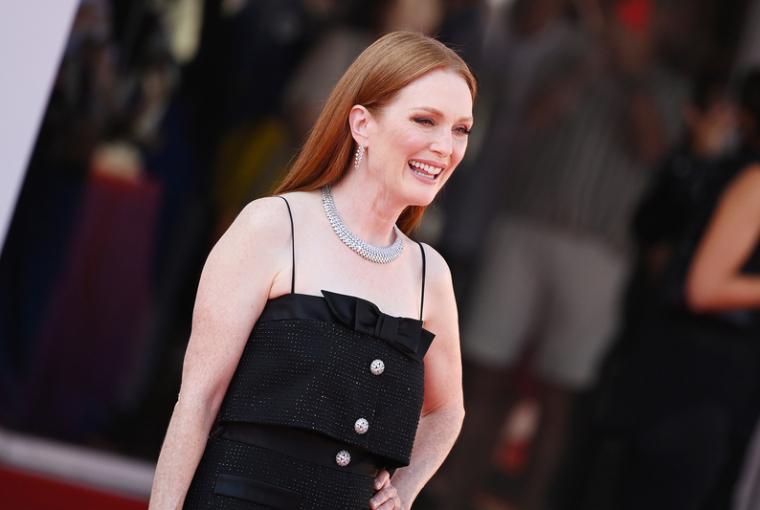 Several films of different genres were shown in Venice on September, 6: Music For Black Pigeons, On The Fringe or En Los Margenes, The Eternal Daughter, La Bambola Di Pezza, Il Signore Delle Formiche, Dead For A Dollar. With this abundance on the red carpet rolled out on the Isla Lido, there were far fewer star guests from the A-list than all the days before. But that’s just the calm before the storm, or rather the premieres and parties that will take place today and in the coming days.

Tilda Swinton has unveiled her new work, The Eternal Daughter, directed by Joanna Hogg. In the story, the mother, played by Tilda, and her daughter return to the family home, where they have to confront the secrets of the past. For the premiere, the alien actress arrived in her favourite Haider Ackermann brand’s tight-fitting mauve dress and temporarily dyed her hair yellow.

A few hours earlier, two beautiful actresses, Penelope Cruz and Julianne Moore (who is currently the President of the Jury) attended the premiere of On The Fringe directed by Juan Diego Botto. Penelope starred in the thriller. On the carpet, both appeared in black evening gowns Chanel – Julianne chose a more succinct cut with thin straps and accent buttons, and Penelope favored a dress with a puffed layered skirt and a seductive neckline.

The final premiere was the presentation of “Dead for a Dollar” directed by Walter Hill. The modern western was presented by the main cast trio – Willem Dafoe, Christoph Waltz and Rachel Brosnahan. The men showed classic looks, while Rachel stepped out in a pink and burgundy Atelier Versace, which emphasized the curves of her figure.

According to the plot of the film, the famous bounty hunter confronts his nemesis, a professional gambler and criminal whom he sent to prison years ago.