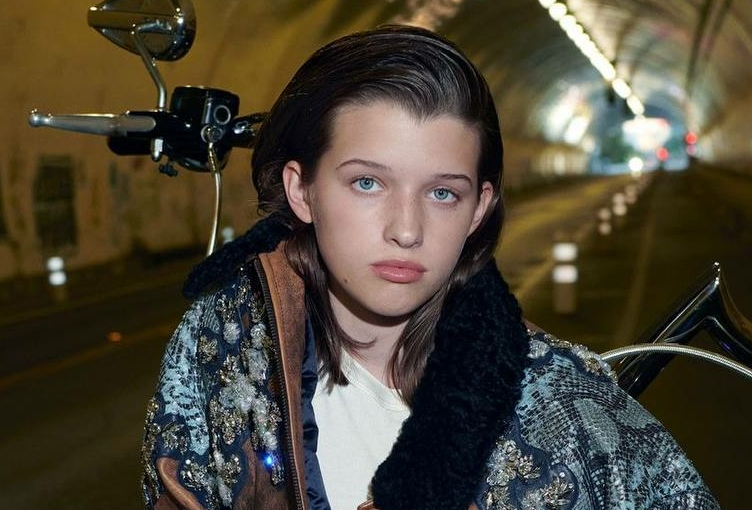 Ever Anderson, the 14-year-old daughter of actress Milla Jovovich and director Paul Anderson, like her mother, started her modelling and acting career early and is already quite successful. She has a string of photo shoots and fashion shows under her belt and last November she became the face of Miu Miu’s advertising campaign for the first time.

Ten months later, the fashion house decided to work with Ever again and invited her to shoot an ad for their autumn/winter collection 2022/2023. Ever Anderson, along with Esther MacGregor and Mame Bineta Sane, presented leather jackets from the Upcycled by Miu Miu range, which are created only from recycled materials, thereby not harming the environment. The brand first launched this range in 2020.

The new models are made at the intersection of masculine and feminine styles – voluminous and rough silhouettes are combined with delicate finishes in the form of fluffy collars and embroidery.

Ever, like her famous mother, made her first magazine cover at the age of nine. It was a photo shoot for Vogue Bambini taken by the famous photographer Ellen von Unvert. The surprisingly maternal-looking girl has already been photographed by respected fashion designers such as Karl Lagerfeld, Mikael Jansson and Peter Lindbergh.

At the same time, the 14-year-old already has roles in big movies. Anderson has already starred as Scarlett Johansson’s young heroine “Black Widow” and in 2023 a new version of the Peter Pan story will be released, in which Ever was entrusted with the role of Wendy. Her partners in that film are Jude Law and Molly Parker. In an interview in 2020, Ever talked about how happy she was to find out she got the role.

“I was at my best friend’s sleepover when my parents called me on FaceTime. My mum asked if I was alone, asked me for privacy in the wardrobe and then made big eyes, a serious face, then smiled and said: “You got the part!”. I shouted so much that my friend immediately realised what it was all about,” said Ever, and added: – “From the very first time I played on set, I fell in love with acting.”