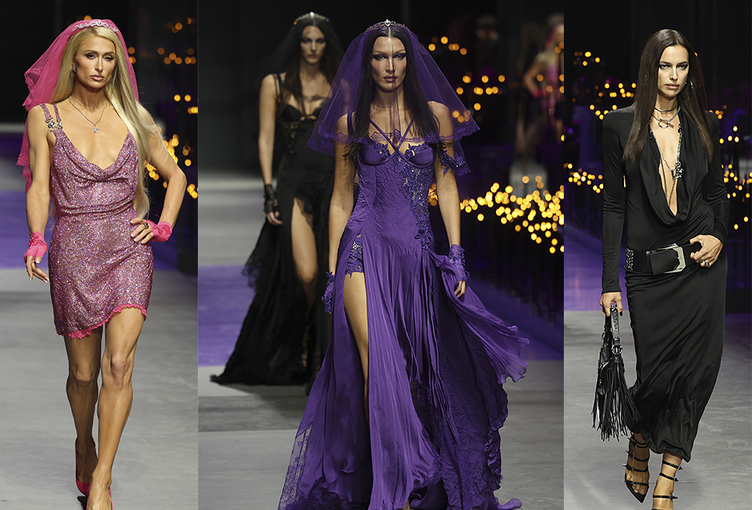 Year after year, Donatella Versace organises shows featuring the brightest girls – the protagonists of the latest news agenda. And this time her guests were not disappointed. In Milan, Paris Hilton, Gigi and Bella Hadid, Emily Ratzagaski and Irina Sheik presented the new Versace collection for spring-summer 2023. Each of them opened a new chapter in their personal lives, so there was more to discuss than just the looks.

Paris Hilton is celebrating her first wedding anniversary with Carter Reum this year, so the blonde beauty appeared on the runway as a bride. The glittery pink mini dress, Paris’ favourite colour, was a direct reference to one of the outfits she wore to celebrate her marriage at a party with friends. The wedding theme on the show was also supported by Bella Hadid’s look. It’s not yet known how far her relationship with the well known art director Mark Kalman will go, but recent paparazzi shots of them relaxing on the beach recently suggest an idyllic relationship between the lovers.

By the way, Bella’s sister Gigi Hadid, who took to the runway in a dramatic black hooded dress, is not alone either. The other day, insiders confirmed her romance with Leonardo Dicaprio. Meanwhile, Dicaprio’s ex-girlfriend Camille Morrone followed Gigi that evening from the audience.

Gothic notes of the spring-summer 202 season by Versace were also demonstrated by Irina Shayk and Emily Ratzakowski. Behind a black leather skirt and jacket combo, Emily concealed her worries about her divorce. Irina, on the other hand, shone on the runway in a dress with an extreme cleavage. In early September, she and Bradley Cooper, 47, fuelled rumours of a possible reconciliation by appearing together on the streets of New York. They hugged unashamedly in public and looked like a real family together with their 5-year-old daughter Leah.