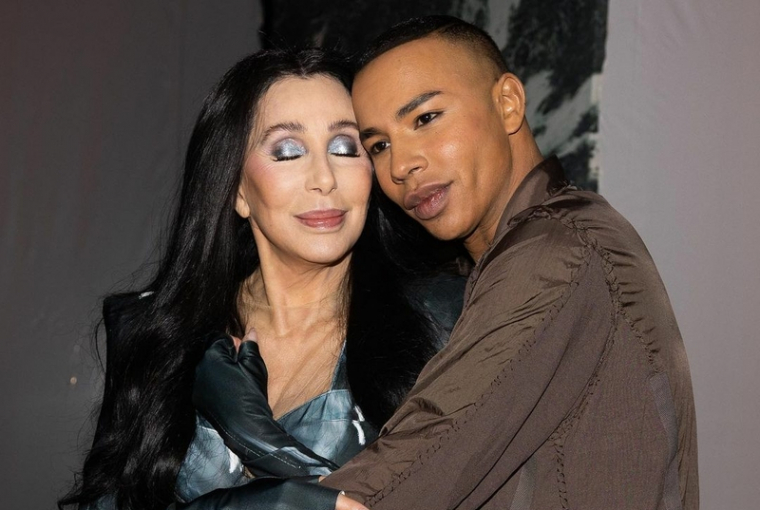 This season, designers have definitely staged a competition for the most famous celebrity to close the show. Donatella Versace chose Paris Hilton, Domenico Dolce and Stefano Gabbana offered Kim Kardashian a collaboration and Olivier Rousteing bet on Cher and he was right.

The 76-year-old American singer and actress appeared on a huge screen as a hologram at the beginning of the show, presenting a bag from the new collection, and at the end of the show she took to the runway in a latex jumpsuit with a cleavage and massive platform boots. She closed the show of Balmain SS 2023 along with the creative director of the brand to her own song Strong Enough and a storm of applause.

For the presentation of the new collection Olivier Rousteing invited many stars, French and not only: footballer Neymar, singer Stromae with his wife Coralie Barbier, Kylie Jenner, Chiara Ferragni, Brooklyn Beckham and Nicola Peltz came to the event. On the catwalk, models Precious Lee, Kristen McMenemy and Ashley Graham, among others, were recognisable.

This time Balmain decided to create a collection with a focus on sustainability. According to the designer, he used fabrics made of recycled paper and banana leaves to create the clothes. According to Olivier, the focus of his new collection is not beauty but a conscious approach to fashion.

“We all know how fast the climate is changing. I don’t see the point in thinking whether our trousers will be high-waisted or low-waisted in the face of global disaster,” added Rousteing.