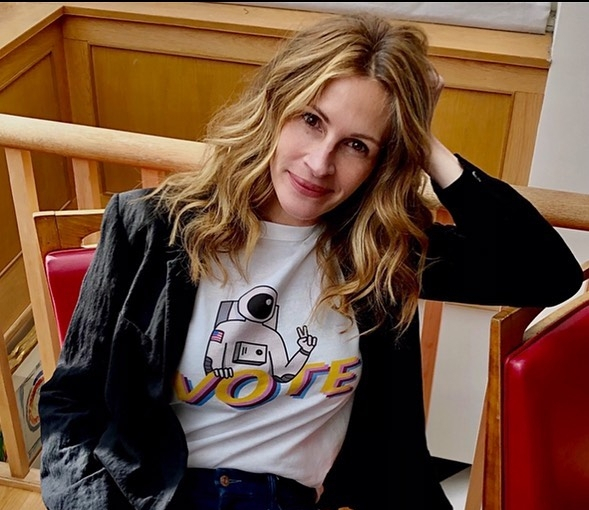 Julia Roberts, 54, doesn’t often speak out publicly about her family life, but as an exception, she gave an interview to CBS and lifted the veil of secrecy. For instance, the actress opened up about a long tradition she and her husband, 53-year-old filmmaker Daniel Moder, still have – writing love letters to each other.

“The first letter he ever wrote to me was on seven pages. And it is still hidden in my possession to this day. One day I will show it to Hazel and say, ‘That’s the kind of guy you should be looking for,'” Roberts said, referring to her 17-year-old daughter.

Speaking about daughter Hazel, Roberts noted that she is still looking for her own style, but is not taking advice from the star mum, who knows her way around evening gowns. Last year, Hazel made her red carpet debut with her father at the Cannes premiere of the film Flag Day, of which he was the cameraman. As a reminder, in addition to daughter Hazel, Julia and her husband have two sons, Finneas, 17, and Henry, 15.

Hazel tried on her mum’s Valentino gown for her high school graduation, the same one that won Julia an Oscar for her role in Erin Brockovich in 2001.

“Last spring, my daughter was going through my wardrobe looking for matching prom dresses and asked: “What kind of dress is that?” I said: “Try it on.” It was too big for her, but she looked cute.”

Roberts said acting work has never distracted her from her family. Above all, she is always taking care of children and supports what she and her husband managed to build over 20 years of marriage.

“When I’m not filming, being a housewife is my full-time job. Of course, it’s not a magical world with rainbows and unicorns every day, but it brings me a lot of joy. Acting has never consumed me. It’s my dream come true, but it’s not my only dream come true. The life I have built with my husband and the life we have built with our children is the best,” she confessed.

It should be noted that Daniel and Julia lead a rather private lifestyle, rarely appearing together in public and even less so with their three children. Shielding the family from public scrutiny was a conscious decision, as their path to marital happiness has not been an easy one. When they met on the set of Mexican in 2000, the son of Hollywood producer Mike Moder, Danny had been married to make-up artist Vera for four years. Julia has had affairs with Liam Neeson, Dylan McDermott, Jason Patrick, Matthew Perry and Benjamin Brett and a two-year marriage to country singer Lyle Lovett. She was reputed to be a flighty person and runaway bride – actor Kiefer Sutherland was dumped by Julia on the eve of her wedding, just like in the movie.

The fact that Daniel was still married couldn’t stop Julia. Two months after Danny’s divorce was finalised, Julia and her lover were married on July 4, 2002.