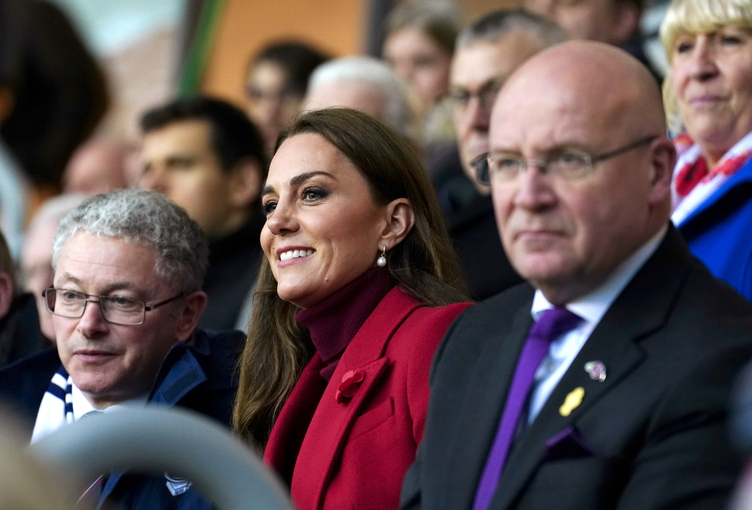 Neither the freezing November rain nor Manchester’s chilly wind kept Kate Middleton from looking flawless at the Rugby World Cup quarter-finals in Wigan. The Princess of Wales came to the game between England and Papa New Guinea to support her country’s national team. And, of course, she grabbed everyone’s attention. She appeared in the VIP box in a striking image: a scarlet coat by Alexander McQueen, worn over a burgundy knitted dress with a high collar, sharp-nosed suede boots and a traditional poppy breast brooch, which the royal family wears in honor of the Day of Remembrance of the United Kingdom, which is celebrated in the UK on November 11. The final touches to Middleton’s fall outfit included a sapphire engagement ring, pearl pendant earrings and the perfect soft wave hairstyle.

The game was Kate’s first rugby match since she succeeded Prince Harry as patron of Rugby Football League and Rugby Union in February this year. Harry has held the position since 2016, when he succeeded the late Queen Elizabeth.

“I am so pleased to be patron of Rugby Football League and Rugby Football Union, two fantastic organisations that are committed to harnessing the power, Sport can help bring communities together and help people thrive. I look forward to working with them at all levels of the games and cheering on England in what promises to be an exciting year for both sports!” – Kate wrote on her official social media account at the time.