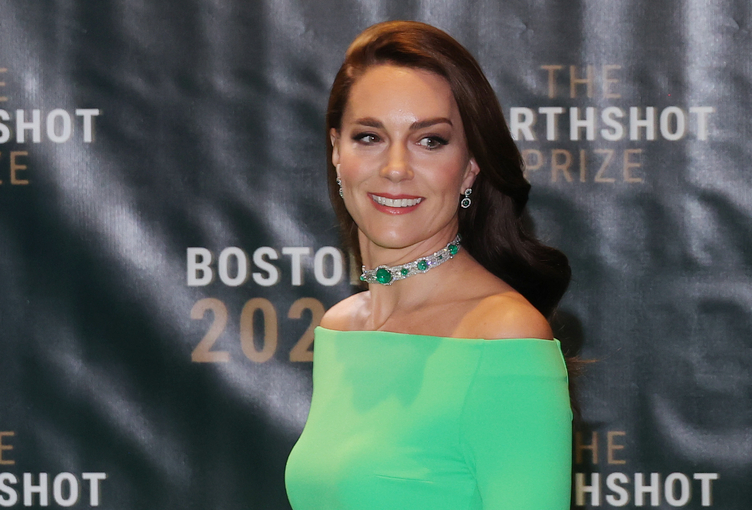 On December 2, the Prince of Wales held its annual Earthshot Prize eco-prize ceremony at the MGM Music Hall in Fenway. And, of course, the green carpet highlighting the event’s agenda was not without the royal family. In front of the photographers, Kate Middleton appeared in a slinky lettuce Solace London gown with open shoulders. The gown is emblematic not just because of the hue. The dress, as the official release highlights, was on loan from Hurr Collective. Kate has thus once again demonstrated one of the most sensible ways to consume.

The Asprey earrings and the 1921 Garrard Art Deco emerald necklace were the other pieces of jewellery to complete the princess of Wales’ resplendent look. The choker with large stones and a scattering of diamonds originally belonged to Mary of Teck, who then bequeathed it to her granddaughter, Elizabeth II, who gave it to Princess Diana as a wedding gift. Unlike the queen, who did not like chokers, Diana often wore this jewellery – during a tour to Australia in 1985 she deftly turned the necklace into a headband.

As for Prince William, he supported his wife with no less elegant image – strict black trousers and a velvet blue jacket over a snow-white shirt, which we have seen more than once the future king in many events.

The Prince and Princess of Wales’ current visit to Boston is their first trip to the States in their new status. The last time heir to the British throne William and his wife Kate were in America was eight years ago, when the couple visited New York.